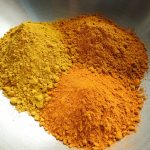 Turmeric has been cited to be one of

* Most Healthiest Foods on earth, as it is extremely high in bio-active antioxidants which provide the human body with a huge list of health benefits.

* Most top ten foods with high in Sirtuins
Sirtuins are believed to protect the body cells from dying, regulating the aging process, inflammation, metabolism and their resistance to stress.

Free Radicals are the main cause for rapid ageing, body decay and breakdown, cancerd, amaging the body in a serious way.   Studies have shown that curcuminoids are very effective in scavenging free radicals and neutralize them. Thus if our body mechanism is not able to fight with these free radicals, turmeric can assist our body to do so very effectively.   It is also believed to have capability of preventing development of free radicals itself. Thus it reduces the risk of damage by free radicals drastically. The mechanism through which turmeric does this is by blocking oxidizing capabilities of metals in body   (reduce iron complex and inhibit peroxidation). Regular intake of turmeric can help body fight back free radicals and save it from diseases and cell damage.

How Effective of Turmeric as Anti-oxidant
Comparisons between common anti-oxidants and turmeric (curcuminoids):

Other benefits of Turmerics:

and much more benefits ….     Optimize Turmeric Absorption For Super-Boosted Benefits   Turmeric is fat-soluble, that means it dissolves in fat. In order to make the most of turmeric, you must take it with a bit of fat, oils such as virgin coconut oil. Consume turmeric with black pepper. “Adding black pepper to turmeric or turmeric-spiced food enhances curcumin’s bioavailability , due to black pepper’s hot property called piperine. To benefit from its anti-oxidant properties, it is recommended to take on daily basis. Studies have shown that pausing turmeric dosage again increases the activity of free radicals.   Turmeric has become one of active ingredients in many anti-aging supplements.  Source: authoritynutrition, turmericforhealth